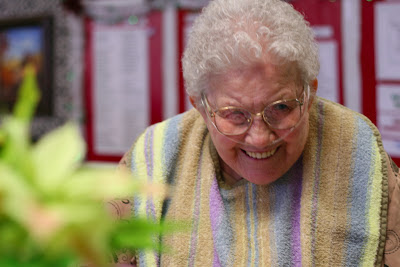 Grandma was tough…when pursuing what she thought was right.

She finished school in eleven years, and Grandpa and Grandma got married 4 months after they met. Once she'd come to a conviction about something, some action soon followed.

I never saw her do anything without purpose, whether keeping house, working hard at her job, or drying between my toes when she would give me a bath.


Once when my sister and I stayed with our grandparents, Grandma convinced me my baseball cap would shape my ears to stick out. So I struck a deal with her…and started sticking my ears up inside my cap.

When Grandpa would talk about getting old, she’d say, “Age is a state of mind,” and she'd smile. But she believed.

Down at John’s Thrift, later John’s Foods, Grandma cared about every detail. And after David Baergen worked at the store, nobody else measured up. “He was such a good worker,” she’d say.

After Grandpa’s heart attack, she fiercely guarded their diet—no more ice cream, bacon, eggs, bear claws, or peanuts. She sweetened jam with fruit juice and thickened it with tapioca.

She was one of the most intelligent people I've known, I suspect, but she wouldn't have said that. She didn’t understand it when others mentioned her “spunk.” To her, that was normal. "There's a lot of plodding in life," she said once. 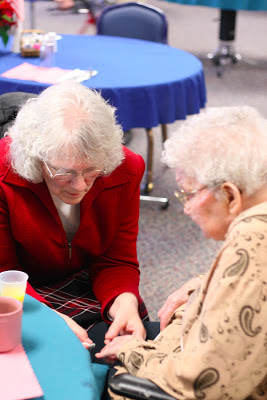 First thing every morning, somewhere between singing and chanting, she’d say, “Good morning to you!”

She always fixed plenty of food. “You better have some more,” she’d say, passing around the casserole for the third or fourth time.

As her body failed her in the last years of her life. She experienced the pain of not being able to do things.

I’ll never forget watching Mom and Grandma pray as each weekly visit came to a close. Grandma hunched over in her wheel chair, Mom putting her arm around Grandma’s shoulders, both of them crying.

When Grandma’s toughness failed, there was one thing she clung to with all the considerable tenacity of her being.

See what others are reading