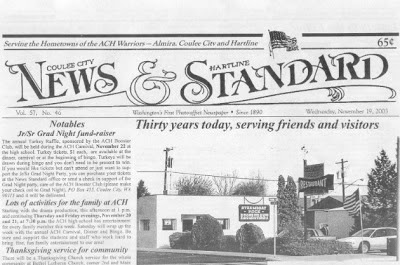 “Hello,” Linda greets four of the “Presbyterian ladies” as they walk into the Steamboat on a rainy November Sunday shortly after noon. The ladies seat themselves near their accustomed spot as Linda follows with four menus. “They have the best steak in town,” Joyce Jones said to general agreement around the table, though today her diet called for soup and a salad.

The only other diners at the moment are waitress Darlene Luedke’s husband Lew, son Ryan Slahtasky, daughter-in-law Farah and grandson Camryn, but Bob and Pauline Dingman soon seated themselves at a nearby table. “I Think we’re entertaining to look at,” Pauline Dingman said as 8-month-old Camryn checked them out from behind his “I love Grandma” bib.

“The food is excellent. It’s really clean. It feels like home to us,” Claudine Davis said as she and her husband Tom ate their salads beneath one of the paintings displayed at the Steamboat by the Highlighters Art Club.

The Rushtons believe the reputation they have among their customers is no accident. They make milkshakes with ice cream and prepare the salad every day. In addition, Don grinds his own meat and makes his own French fries. Don also noted the “good loyal employees” they have had over the years both waiting on tables and cooking breakfast.

The restaurant had been closed for 3 years when the Rushtons moved to Coulee City in October 1973. In their first year the Rushtons stayed open 9a.m.-9p.m. seven days a week before deciding to take Mondays off. They now also take Christmas, Thanksgiving and Easter off as well as a few days between Christmas and New Years.

Their sons Brian and Murray, 5 and 3 when the restaurant opened, were joined by a sister Lisa in 1979 and a brother Jared in 1984. All four children helped out in the restaurant. Both Bryan and Jared have cooked; Murray washed dishes during busy rodeo weekends; and Lisa has waited tables. The Rushtons also have four grandkids Skyler and Sophia Smith of Ellensburg and Mikayla and Whitley Rushton of Coulee City.

Don has also served 4 terms on the town council and joined the fire department in 1974, becoming the chief that same year. “I kind of use the fire department as my hobby” Don said. For many years Linda remembers having to manage the restaurant as best she could whenever Don got a call. “She learned quick,” Don said. In 1987 though, when a fire burned up from Sun Lakes State Park and threatened Coulee City, they had to close the restaurant for three days.

In 1980 the whole family took a memorable “vacation” to Arlington, Tex., to get a new ambulance. On the way, they took in the Grand Canyon, Salt Lake City and Linda particularly remembers Jackson Hole, Wyo., mosquitoes being “as big as songbirds.”

Besides the paintings from Highlighters, the wood panel walls display local artist Don Nutt’s work; pictures of Steamboat Rock, the geologic feature for which the restaurant is named, hang above the cash register; harness hames, horse bits, and branding irons remind patrons of area history; and a pair of longhorns long since abandoned by their original owner look down from the wall behind the counter. “When people come who don’t live here, they want to know about the history,” Linda said. And Linda, whose grandfather once used horses to farm in the area, enjoys telling them.

“We’ve made a lot of friends,” Linda said, “That’s something to cherish.” “This town is full of good people,” Don said looking out the window as daylight faded to dusk. In a few minutes he could be seen in front of the Steamboat retrieving “Old Glory” from the sidewalk on the corner of 5th and Main.


Reprinted with permission from "News & Standard," Coulee City, Washington, all other rights reserved.
by Loren Paulsson

See what others are reading